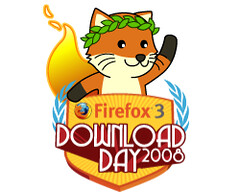 This is not an common scene we could see everyday. Maybe it’s not a big deal for you, but for me, it is. With only a few plugins installed in my Firefox, I’ve never seen that many plugins updated at the same time before. (“that many” means three. ^^)

I know, I know, you all have already got the news that Firefox 3 is going to be available at 17th, June. I just can’t help feeling so excited about it, because I’m using Firefox 2 currently. I’ve tried a beta version of Firefox 3 re-encapsulated by PortableApps, and it works just fine. These are several features you should know about it. However, being a perfectionist, I prefer a more stable version for long term usage. By the way, Mozilla is holding an event for Firefox 3 named “Download Day“, the purpose of which is to set a Guinness World Record for the most downloaded software in 24 hours. If you’re a Firefox fan just like me, feel free to join us and spread it, then enjoy the web!

a dreamer, a learner, a lawful beginner.